About the French Program 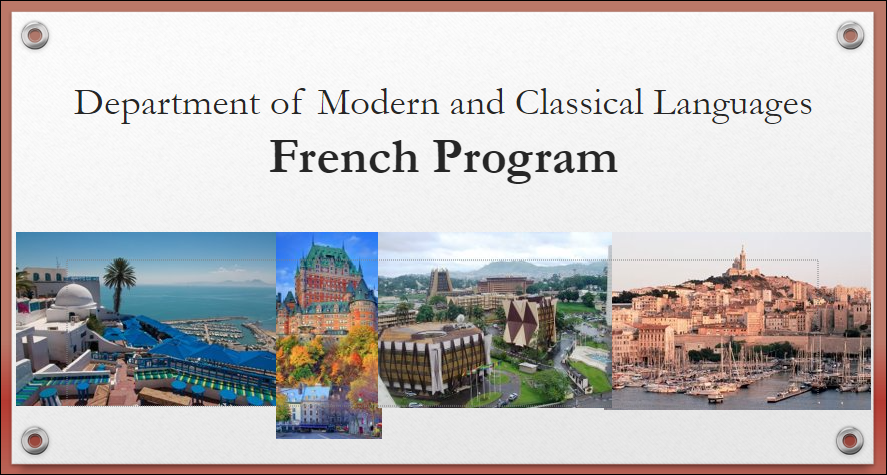 The French section of the Department of Modern and Classical Languages offers courses in language, linguistics, literature, and culture. Students of French acquire the skills required to not only speak the language, but also to learn about and appreciate Francophone societies, cultures, and artistic expressions.​

Where is French spoken?​

French is spoken in over 50 countries, making it one of the most widespread languages of the world. It is estimated that the number of first- and second-language speakers of French worldwide is about 230 million people. It is an official, co-official, or de facto national language of 29 countries. Countries using French as either a first or a second language are located on four continents. Four of them are in Europe: France, Belgium, Switzerland, and Luxembourg. Two are in the Americas: Canada and Haiti. There are also several overseas departments (Martinique, Guadeloupe, La Réunion, Mayotte, and French Guiana) and territories (French Polynesia, Wallis and Futuna, etc.) of France. Several countries in Africa and Asia have a strong Francophone presence. French is a major second language in Arabic-speaking Algeria, Tunisia, and Morocco. Africa has a large and growing population of French speakers, with the number of first-and second-language speakers exceeding 100 million.​

French is one of the official languages of the United Nations (UN), the North Atlantic Treaty Organization (NATO), and the European Union (EU). The International Francophone Organization includes 84 member states and governments (58 members and 26 observers).​

Requirements for a Minor in French​

A French Major is just 6 classes away…​

Note that in addition to all the required courses, 20 elective credits in French are needed to complete a major in French. ​

Can I do a dual or double major?

Dual Major in French and another Language

50 credits for each major.

Double Major in French and Linguistics​

Other popular double major combinations with a French major are:​

If you wish to do a dual or double major it is important that you meet with the advisors in both programs or departments to draft a study plan ahead of time​.

What is a French Major with Teaching Endorsement?

Note: FR 401 (Advanced Composition) and LANG 401 are only offered in fall. See schedule in advance or talk to advisors to carefully plan your future registration.​

Prerequisites: 6 credits in one world language beyond second year; Grade of B or better in LING 201 or instructor permission.​

To be taken prior to field experience. Theory of world language instruction. Topics include contrastive analysis of English with target language; comparative first and second language acquisition; cognitive, attitudinal and political dimensions.​

A passing score on the World Languages WEST-E test, and proficiency in the designated world language assessed by ACTFL oral and written tests at the Advanced-Low level, are required by the state.​

How and when to declare my French Major?

Procedure for Declaring a Major or Minor in French​

Typically students declare a minor or major in French after or near completion of FR 203 or FR 301.​

When meeting with the advisor, you should bring:​

Students who enter at the 301-level may request AP credit from the department for courses (GURs) numbered 201, 202, and 203 upon successful completion of FR 301 and another 300 level French course with at least a B in each course.  ​

At least 50 % of the credits required for a major or minor must be earned at Western.

Plan of Study for Students Majoring in French​

When declaring their major in French, students should carefully review with the French advisor their plan of study, the requirements for the French BA, the course offerings for future quarters and the prerequisites for upper-level French courses to ensure that they have enough quarters ahead of them to complete the major. (For instance, students declaring a major in the fall when in FR 301, unless studying abroad, will need at least 4 additional quarters –Winter/Spring/Fall/Winter– to complete their major in French. Note that French upper-level courses are rarely offered in the summer)​

Due to the structure of the program and staffing limitation, Independent Studies in French are only allowed for 1 or 2 credits. Students can obtain these credits by taking a regular French course and completing additional assignment(s) for credits. Independent Study cannot be taken in lieu of a course offered during the year.​

FR 401 is only offered in the fall and is a requirement for all 400-level seminars. ​

We offer a variety of programs that provide educational experiences for students to live and study in another French-speaking country. Special application and registration procedures are required for participation in foreign study programs, and students should consult with the Education Abroad office, Miller Hall 208, well in advance of their planned quarter abroad, as well as with the study abroad advisor of the language section to discuss transfer credit.