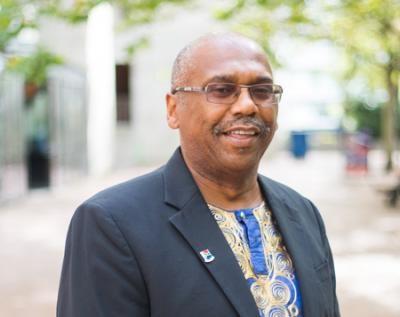 Vernon Damani Johnson has been a faculty member in the Department of Political Science at Western Washington University since 1986, and he was appointed the Director of the Ralph Munro Institute for Civic Education in the spring of 2015.

As a scholar-activist, Dr. Johnson was on the advisory committee to Reverend Jesse Jackson’s Presidential Campaign in Washington State in 1988 and served on the Steering Committee of the Washington State Rainbow Coalition from 1988-92. He also helped to found the Whatcom Human Rights Task Force in 1994, and served as president of the board of the Northwest Coalition for Human Dignity, a regional human rights organization, from 2000-2003.   Professor Johnson is the recipient of the Philip E. Sharpe Community Engagement Award (Western Washington University, 2015) and the Reverend Martin Luther King, Jr. Unity Legacy Award (Bellingham Unity Group, 2020).

In addition to his scholarship and activism, since 2008 Professor Johnson has led Western service-learning classes to South Africa.