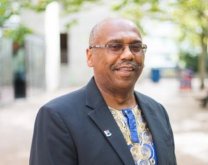 Dr. Vernon Damani Johnson was a faculty member in the Department of Political Science at Western Washington University from 1986-2021. His research interests include:  the politics of development, African politics, and race and public policy.  In addition to teaching courses on the politics of Africa, race and public policy, Dr. Johnson leads a summer service-learning class in South Africa that involves Western students in Political Science and Human Services and Rehabilitation in the work of local NGOs.  He served as the Program Director for the Munro Institute for Civic Education from 2015-2021.  He was founding editor in chief of the African Journal of Governance and Development from 2011-2018.

In addition to his academic pursuits, Professor Johnson was on the advisory committee to Reverend Jesse Jackson’s Presidential Campaign in 1988 and served on the Steering Committee of the Washington State Rainbow Coalition from 1988-92.  In Bellingham, he helped found the Whatcom Human Rights Task Force and chaired its board from 1997-2000.  He also serves on the board of the Slum Doctor Program and was the recipient of the 1997 Diversity Achievement Award at Western Washington University.  In September 2015 Professor Johnson received the WWU Philip E. Sharpe Community Engagement Award for his outstanding community service. In the Post-Ferguson era he has been doing racial equity education and consulting.