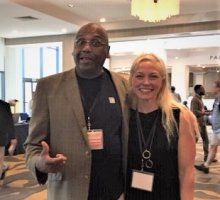 Today Kiku is an Assistant Professor of Political Science at Pace University in New York.  An accomplished scholar, she specializes in the fields of Race and Ethnic Politics, Latino Politics, and Religion and Politics. Her research addresses how culture, values, and identity intersect and ultimately affect political beliefs and patterns of engagement.  She engages in diversity research and scholarship through the Diversity Scholars Network of the National Center for Institutional Diversity.

Building on her undergraduate experience at Western with Pi Sigma Alpha (she wrote her Honors thesis on the club), Kiku is now the faculty advisor for the Pace Pi Sigma Alpha chapter at Pace University.

“In looking back, I realize how getting involved with Pi Sigma Alpha taught me a lot about individual agency - that it was not just "other people" who were smart enough or talented enough to make things happen, but that I, too, could work to organize for a cause that I cared about, and that I was capable of creating something that was bigger than myself. Because PSA is a national honor society, I was pushed to consider how my campus events were linked to a larger organization and its goal of promoting critical thinking and academic excellence. I also learned how creating a space for discussion and disagreement could help build community amongst people of diverse backgrounds and contrary opinions.  As a professor of political science, and now-advisor for my university's Pi Sigma Alpha chapter, I try to pass on these same lessons to my students: they are smart, they do belong, and they can and should talk to people who do not think like them. “