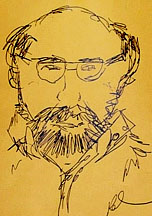 Lucky Tedrow is Director, Center for Social Science Instruction, (CSSI), Demographic Research Laboratory, (DRL), Department of Sociology. After graduating from Western Washington University with a Bachelor of Science degree and a Master of Arts degree in Sociology, valuable applied experience was acquired at the Forecasting Division, OFM, State of Washington. Additional training was obtained at the University of Washington where he worked on a research contract on mathematical models of fertility distributions funded by NICHD. Professor Tedrow was a Professional Associate at the East-West Population Institute, University of Hawaii; a Visiting Scholar at the University of Texas-Austin Population Research Center; and a YSSP participant at IIASA, Laxenburg, Austria. As Director of the Demographic Research Laboratory in the Sociology department he has secured cutting-edge resources for student and faculty research. Several grants for computer equipment through university funds, Western's Student Technology Fee competition 1998, 2002 and 2007, Apple Computer, Inc., and the National Science Foundation have kept the Center & Laboratory with up-to-date technology over the last quarter century. Strategically equipped for a regional university with a commitment to excellence in undergraduate education, Professor Tedrow has regularly sponsored student research presentations at undergraduate conferences; a student demography scholarship and has been Principal Investigator on six National Science Foundation 'Research Experiences for Undergraduates' site programs [1988, 1989, 1991, 1992, 1994 and 1999] on "Applied Demographic Research on Migration". Over the past 15 years, Professor Tedrow was Co-Principal Investigator with Professor Teachman on several grants: "Determinants and Consequences of Military Service: 1940-1988"; Military Service and Patterns of Marriage, Cohabitation, and Union Dissolution"Impact of Military Service on Health"(PDF), all funded by the National Science Foundation; and “Stimulating Undergraduate Interdisciplinary Research in Population and Health” funded by the National Institute on Aging (2007, 2008). The most recent grant (7/1/12-6/30/15) was "Military Service and Troubled Behavior" funded by the National Institute of Child Health and Human Development.